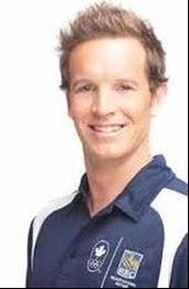 He has also been coaching youth volleyball for 15 years. Christian has coached club volleyball at just about every age and level from 13/14U developmental teams all the way up to 18U Provincial Champions, and National Medal winning teams. He was the Head of the Volleyball Program at Havergal College in Toronto for 10 years where the school won more than 25 Independent School Championships from 13U up to 20U and a Provincial Championship.

Ten years ago Christian and 3 time Olympian and Olympic Medalist, John Child started Leaside Volleyball Club. The club offers competitive team that have won numerous Provincial Championships as well as a house league that has over 1000 kids playing annually. He now lives full time in Vancouver with his wife, Olympic Snowboarder and Dr. of Traditional Chinese Medicine, Dominique Vallee.

Christian is also the head coach of the top Canadian Men’s beach volleyball team, 2016 Rio Olympian Ben Saxton and Grant O’Gorman.
Jamie Hatch (Broder) - Vice President
Jamie's biggest claim to fame is the fact that her and her partner Kristina Valjas competed in Women's Beach Volleyball at the 2016 Olympic Games in Rio where they placed 9th overall. She also made Canadian history in 2015 by winning the first ever medal for Canadian Women’s Beach Volleyball, a gold medal at the FIVB Open in Fuzhou China.

Jamie is a favourite with smaller athletes as she stands only 5’7” tall yet manages to not only compete at the highest level, but win, too. Having just completed a Masters Degree in Business Administration, Jamie brings a wealth of knowledge to the club from a playing, coaching, and business perspective. ​

Maverick has also coached youth and senior national team athletes for over 10 years - his biggest focus and goal as a coach is to develop athletes, plain and simple. Currently completing his Advanced Beach Development Coach certification (formally NCCP Level III) and is a certified Indoor Development Coach (formally NCCP Level II) his long term goals are to drive the development and athlete support systems in beach volleyball for BC, while also contributing to BCO's indoor club volleyball teams as a head coach.
Natalie Eades - General Manager

BCO Board of Directors

​BCO Volleyball Club is a registered non-profit organization. The current Members of the Board are: